This was my 1964 NovaWagon and the picture was taken at a car show held at Sears in the Centre at Salisbury Mall in Salisbury, Maryland. I think I was about 17 years old.  This car had been in my family since 1973 when my parents bought it.   It was our family car and then I drove it all through high-school and college.  As many people do, my parents nicknamed this car "Nelly" the nova.  So all I remember growing up was the car being referred to as "Nelly" the Nova by my parents.   "Come on kids, get in Nelly, we are going to see your Mom-Mom and Pop-Pop"... As my sister and I would fight all the time, she ended up in the back seat and I would always sit in the "way-back" as I called it and would look out the back window as we drove.

After I got out of college, I decided to finally pro street the car.  It was a "back-yard" cruiser style pro-street ... not meant for racing, just to look cool and ride.  However, I stopped working on it because I was racing a 1965 Nova Sedan that was taking all my funds....well that was many years ago.   At my last count, I had put over 26 engines, 10 transmissions, and about 9 rears in the car throughout high-school and college. As you can imagine...I had a lot of fun!!! LOL!!

Just to note... This car was very rare in its day. It was an original 283 power-pack V8 car with a 4bbl carburetor and aluminum powerglide trans. It was a factory air conditioned car with power brakes and power steering. It has all the original tinted factory glass from GM.  I had people trying to buy this car for years. Many of them told me to name my price, because they wanted it so bad.

It was a great car and I have a lot of memories from the years of driving it which I wanted to build another one so badly....

I finally sold the car to a buddy of mine around 2004 who bugged me about buying it for years.  It sat in his garage for about 6 years with me asking him from time to time about selling it back to me.  He would always say, "no, I'm gonna start working on it one day".  Then one day I was sitting at work and got the phone call.  He was ready to sell the car back to me.  I immediately went over and picked up the car.  It sat in my garage for about a year when I realized that I didnt have the extra money nor time to finish the car the way I wanted.  So I did the unthinkable and sold it AGAIN....This time it went to a very nice couple in Virginia who race a Pro-Mod Chevy II.    I was told they use my old wagon to pull the race car back to the pits after each run...VERY COOL..!

This car is now completely restored and painted maroon instead of black down the sides and it is still silver on the top just like you see in the other pictures. I would very much like to buy it back if I could.  My father saw the car in Ocean City Maryland at the Cruizin' Car Show in May of 2012, but couldnt catch up to the owners to talk to them.   I would love to buy this car back if the new owners would be willing to sell it.

Please email me with any information you may have regarding it's whereabouts. THANKS IN ADVANCE! 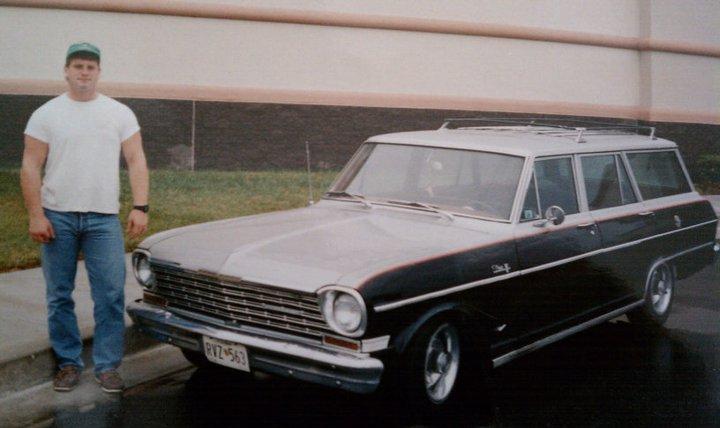